The Garden of the Holy Spirit
Saint Iakovos (Tsalikis) of Evia

Born in Livísi, a picturesque village in Asia Minor, the Tsalikis family was forcibly uprooted from their ancestral homeland. Leaving the life they knew behind, they took with them what was their true life — their Faith. Resettled in Northern Evia, the future Saint was raised in piety and trained in virtue by his grandmother Despina and mother Theodora. Iakovos worked hard alongside his father, Stavros, and eventually became the provider for the family.

At the age of 32, he realized his calling in life by entering the Monastery of Saint David the Elder in Evia, living the rest of his life there as a monk. He rose above insurmountable obstacles, labored ascetically beyond what is human and suffered greatly for the sake of Christ. He received divine gifts as his reward, including clairvoyance and miracle-working, becoming an Elder of great stature.

The author of this book, Professor Stylianos Papadopoulos, was blessed to know the Elder personally. His intimate knowledge of the Elder’s life together with his literary talent make the story on these pages come alive.

God has not left us without Saints in our age of falsehood and agnosticism. Saint Iakovos intercedes for us today, now glorified among the Saints in heaven. From the vivid, lively stories in this book, may we be moved to glorify God and ask Saint Iakovos to intercede for us!

Elder Iakovos was declared a Saint on November 26th, 2017 by the Synod of the Ecumenical Patriarchate.

We should all consider ourselves blessed, for we have all lived to see Elder Iakovos Tsalikis of Evia canonized as saint. This blessed elder lived in our own time, having been born on November 5, 1920 and falling asleep in the Lord on Nove­mber 21, 1991. His Feast Day will be celebrated on November 22.

St. Iakovos was born into a poor family in Asia Minor, who were part of the “population exchange” that came about as a result of the tragedy. Eventually settling in Evia, St. Iakovos did not receive education beyond elementary school—and yet such was his love for our faith, that he memorized the Divine Liturgy by the age of seven.

Blessed with both a beautiful voice, and seriousness concerning the scriptures, his own mother predicted his future as a priest, before she fell asleep in 1942. Even during his required military service, he was not discouraged when his peers mockingly referred to this pious twenty-five year-old man as “Fr. Iakovos.”

Though he longed to enter monastic life, as a loving son and brother, his first thoughts were for the welfare of his sister, especially after their father fell asleep in the Lord in 1949. After she married, St. Iakovos entered the Monastery of the Venerable David in Rovies, and was in late 1952, tonsured as a monk, and then ordained a priest.

St. Iakovos soon became known to all for his diligence and his humility. He refused no task, and was known to walk 4 to 5 hours to the village of Limini to seek the guidance of his Spiritual Father. Though his cell was often freezing, he suffered his trials with deep patience and love, engaging in spiritual warfare through fasting, and sleeping only two hours a night—the rest of his time he spent in prayer.

Even when he was made the Abbot of St. David’s in 1975, he was known to insist to visiting priests serving Liturgy that St. David was the Abbot, not himself. Such was his deep reverence and respect for both the monastery’s patron—and St. John the Russian—that he carried on conversations with them as one would with his closest friends. When St. Iakovos was due to have an operation he is known to have said, “Saint David, won’t you go by Prokopi and fetch Saint John, so you can come here and support me for the operation? I feel the need of your presence and support.” Ten minutes later, these blessed saints appeared to him.

As Abbot, his loving care to all visitors was well-known. His spiritual insight was such that he was able to know one’s difficulties before a visitor even spoke. Though not formally educated, his deep understanding of Orthodoxy was a blessing to all who encountered him. This is why, when he too fell asleep in the Lord, though few were informed of his funeral, thousands still arrived and popularly declared him holy.

And now we are blessed to commemorate this simple yet powerful man of God, whose connection to the saints and our Creator will never cease to inspire us all. May St. Iakovos intercede on our behalf, now, and always! “He [Elder Iakovos] is one of the greatest saints of our century.” +Elder (now Saint) Porphyrios of Kavsokalivia (+1991)


Temporarily out of stock 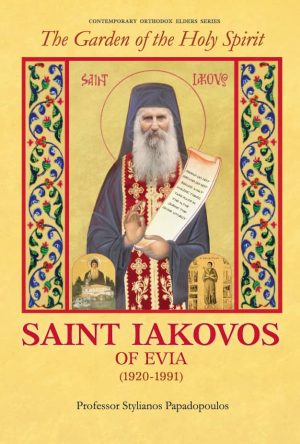