Papa Dimitri: The Man of God

Father Dimitrios Gagastathis (+1975) was a towering, prophetic figure of our days, a man of great faith, humility and simplicity, a married priest, and father of nine daughters. His life is a wonder. The numerous miracles he recounts in these autobiographical notes testify to his sanctity. Also included are testimonials from Saint Amphilochios (Makris), Elder Emilianos of Simonopetra and Elder Philotheos Zervakos. 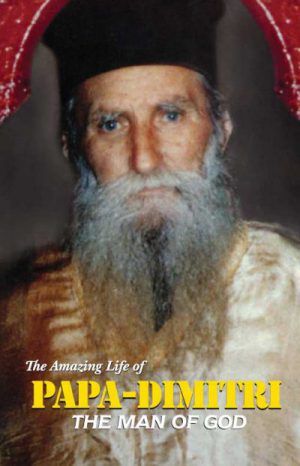 Allow us to introduce to you a hero, a champion, a contemporary married Saint who reposed in the Lord in 1975—Father Dimitrios Gagastathis—a towering, prophetic figure; a man of great faith; a man of prayer, whose feet were touching the earth, but whose head reached the heavens.

Father Dimitrios, or "Papa-Dimitri" as he was known, lived amidst the problems and cares of everyday life as a married priest (with nine daughters), yet "lived like an angel rather than an earthly man."

This book contains mostly autobiographical notes taken from Papa-Dimitri's correspondence. In these notes he recorded many wondrous and extraordinary experiences which testify to his "living faith" in the true God. He communicated with the Archangels and the Saints as if they were visibly present. After experiencing their intercessions he would often proclaim, "Our Faith is alive!"

Papa-Dimitri had very little formal education. In his humility, he stated that he could not even deliver a proper sermon, but having received the gifts of simplicity, purity of heart, meekness, and love for God, his very life became a living sermon. “You, Father Dimitrios, possessing simplicity of heart and an ardent love towards the Lord, also attract the grace of the Holy Spirit, the Comforter, Who strengthens you and makes you wise to carry out your holy endeavors. ... I give Him glory for making you worthy to work in a manner well pleasing to Him, especially in these difficult times of material-mindedness and indifference among the congregation of Christians.”

“Ever-memorable Papa-Dimitri Gagastathis became holy, a son of God and god by grace because he kept with exactitude—from the beginning until the end, till death—the Confession of Faith and the promises he made at Holy Baptism. Since his childhood, he had faith in God, loved Him, and kept His commandments. He actively hated and repelled the devil and the works of darkness while working out the works of God and of the light; that is, the virtues. His firm and ardent faith in the true God led him to the attainment of all virtues.” “His life flowed naturally, in simplicity and ingenuousness of heart; at the same time, though, it was a continuous journey, an ascent towards God, a constant experience of God’s revelation. Papa-Dimitri lived in a world of miracles; his life can credibly be explained only as a continuous intervention of Divine Grace.”

View the contents
Read the Foreword by Archbishop Nathaniel (OCA)