“The Son of God becomes Son of the Virgin”

“Today is the beginning of our salvation...
The Son of God becomes son of the Virgin.”

(Troparion of the Annunciation feast)

From all eternity, even before God created the world and the human beings, He knew of the fall of Adam. Since He is outside of time, He sees everything at once. Therefore, as He created,

...as God created His cosmos, He also provided for it. Everything followed His infinite wisdom and His intelligent plan. It came into existence, receiving its form and constitution because God willed it.

Even before the fall, God had provided for the redemption of the human beings, the pinnacle of His creation. From all eternity God saw how, when, and by who the redemption would be accomplished. Thus we see that immediately after the transgression of the first-formed people in His image, God gave them the first promise of their redemption in the future, at the appointed time His inscrutable will had determined. Thus He told the serpent:

“I will put enmity between you and the woman,

and between your offspring and hers;

he will strike your head,

From the very moment of the transgression, God, who cannot abandon the work of His hands, provides for the redemption of His creation. Though fallen, because of their misjudgment, act of disobedience and mistrust in their Benefactor, the Good Lord, has in store a plan that will actually bring the human beings closer to Him than if they had never sinned.

But that’s a job that even the omnipotent and omniscient God could not do by Himself. He also needed the cooperation of the human beings He created, because He wanted a free response from them, not a course of action about which they would have no say. God wanted the human beings to exercise the highest gift bestowed on them, their free will.

The appointed time, the kairos, came, when a young virgin appeared. She responded to God’s love so warmly, that she attracted Him as a lightning rod attracts lightning. Thus the incarnation of the Son of God could now take place, because the holy Virgin was born, who aligned herself perfectly to the will of God, and thus conceived the source of Life, the Lifegiver Christ.

The holy Virgin was not used by God like a test tube or as a surrogate mother to give birth in the flesh to the Second Person of the Holy Trinity. As Tertullian put it (all the way back in the second century), Christ was not born, as the Gnostics contended, “through the Virgin” nor “in the Virgin”, but “by the Virgin” (De Carne Christi 20). St. Gregory the Theologian declares that, “whoever does not accept the holy Mary as Theotokos (Birth-giver of God), is Godless” (ep. 101).

The Fifth Ecumenical Council in its sixth canon repeated the anathema voiced by St. Cyril of Alexandria, (and I bring the canon here in its entirety):

If anyone declares that it can be only inexactly and not truly said that the holy and glorious ever-virgin Mary is the mother of God (Theotokos), or says that she is so only in some relative way, considering that she bore a mere man and that God the Word was not made into human flesh in her, holding rather that the nativity of a man from her was referred, as they say, to God the Word as He was with the man who came into being; if anyone misrepresents the holy synod of Chalcedon, alleging that it claimed that the virgin was the mother of God only according to that heretical understanding which the blasphemous Theodore put forward; or if anyone says that she is the mother of a man (anthropotokos) or the Christ-bearer (Christotokos), that is the mother of Christ, suggesting that Christ is not God; and does not formally confess that she is properly and truly the mother of God, because He who before all ages was born of the Father, God the Word, has been made into human flesh in these latter days and has been born to her, and it was in this religious understanding that the holy synod of Chalcedon formally stated its belief that she was the mother of God: let him be anathema.

In great humility the holy Virgin recognized her pivotal role in the plan of salvation, and thus, cognizant of her role, she exclaimed in her Magnificat,

Even the founder of Reformation, Martin Luther, in his commentary on the “holy canticle” (as he called the Magnificat) written in 1521, referred to the “blessed Mother of God” (he calls her that way) as the example who “teaches us how we must love and praise God.” He continues,

“She wishes to be the greatest example of God’s grace, so as to encourage all to confidence and praise of divine grace.” (Martin Luther, Religious Writings, edited by V. Vinay, Turin 1967, pp. 431-512).

These are great mysteries, my friends, difficult to delve into, and impossible to comprehend. How did the Second Person of the Holy Trinity indwelt the most pure womb of the holy Virgin is a great mystery and an inexplicable miracle, even for the angelic powers. “That is why,” St. Gregory Palamas says,

“when the holy Virgin asked the Archangel Gabriel, ‘How can this happen to me?’ he was unable to say the manner, but he only said, ‘The Holy Spirit will come upon you, and the power of the Most High will overshadow you.’” (hom. 14)

Thus the holy Virgin conceived the Son of God, who now becomes her Son.

We don’t want to turn this sermon into moralizing, but the subject begs us to address the subject of when does life begins, which, of course, is not at all a question within the Orthodox Church, but only among the unenlightened ones. As with many other topics, Orthodox theology is at odds with prevailing opinions among legislators, politicians, ethicists, medical professionals, philosophers and even certain religious groups.

For the Orthodox Church human life begins at the very instant of conception. This is indicated by the feasts of three conceptions the Church celebrates: those of St. John the Baptist, of the most holy Theotokos, and of today’s feast, the Conception of Christ our God, known as the Annunciation of the most holy Virgin. Already in the fertilized embryo divinity and humanity are united “without confusion, without change, without division, without separation” (The Chalcedonian Decree).

The question has been raised: when and how does the soul enters the body? Our answer as to when, as the Church teaches, is that there is no time in which the body existed without the soul, therefore the embryo is endowed with a soul at the very moment of conception. As to how did it acquire it we answer that the spiritual life is bound inextricably with the physical life, in an inseparable unity. The soul does not preexist (a heretical teaching condemned by the Church, 5th Ecumenical Council). God does not create it separately. Although it has an existence apart from the body after death, it does not have a separate existence prior to the conception. Therefore the human being is complete, body and soul, at the very moment of conception.

Not only does the embryo have a soul from the very moment of conception, it even receives the grace of the Holy Spirit. The Archangel Gabriel told Zacharias that the son his wife would give birth to would be great and that

In fact, St. John the Baptist, when only a six-month old fetus, recognized Christ (who had just been conceived by the holy Theotokos) from the womb of his mother. “Leaping” in his mother’s womb, since he did not yet possess a voice, he transmits the prophetic utterance to his mother, who then calls her cousin Mary “mother of my Lord”:

“why has this happened to me, that the mother of my Lord comes to me? For as soon as I heard the sound of your greeting, the child in my womb leaped for joy” (Lk. 1:43-44).

With in-vitro fertilization already taking place and with human cloning around the corner, one may wonder: what happens in such cases, when, and how does a fertilized egg become a complete human being? But of course in the same way as through the natural and physiological means. That’s not what we should be thinking. What we should be thinking is, Do we have trust in God, as Joachim and Anna did, and as Zechariah and Elizabeth did, who prayed to God even in their old age to give them a child? They continued to pray when others of little faith would have given up.

Someone asked me if a pregnant woman should receive holy Communion. A pregnant woman should pray for her unborn child, preferably out loud, so that the child will hear the prayers and be sanctified through them. A pregnant woman should likewise read from the holy scriptures and the lives of the Saints out loud, cense her home and the holy icons, and drink some holy water first thing in the morning every day, go to confession, and yes, receive regularly the holy sacraments, so that the fetus will grow both physically and spiritually. Thus the parents will provide the proper conditions for the further spiritual development of their child.

My dear brothers and sisters in Christ: May the Lord, whose Incarnation we celebrate today, through the intercessions of His all immaculate Mother, illumine our minds and strengthen our wills, particularly those of parents and future parents, to know and to do what is pleasing to Him. Amen. 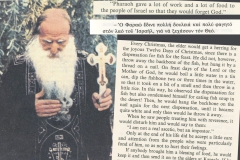