The “Jesus Prayer”:
11 quotations from the Saints

The “Jesus Prayer” is called “the lifeline of the soul and of the body”, the “foundation of perfection”, a “spiritual weapon” and the “source of all good works”. May we all learn from the Saints to acquire prayer without ceasing.

1
The Jesus Prayer in Holy Scripture

What was the Canaanite woman shouting behind Christ? What was she begging for? “Have mercy on me, Lord, son of David; my daughter is badly demon possessed…”1 And after the Lord tested her faith, to set an example for future generations until this day, He worked the miracle and said: “O woman, great is your faith! Let it be done for you as you desire.”

From this “Lord, have mercy” begins also the theology of the Noetic Prayer of the Heart. 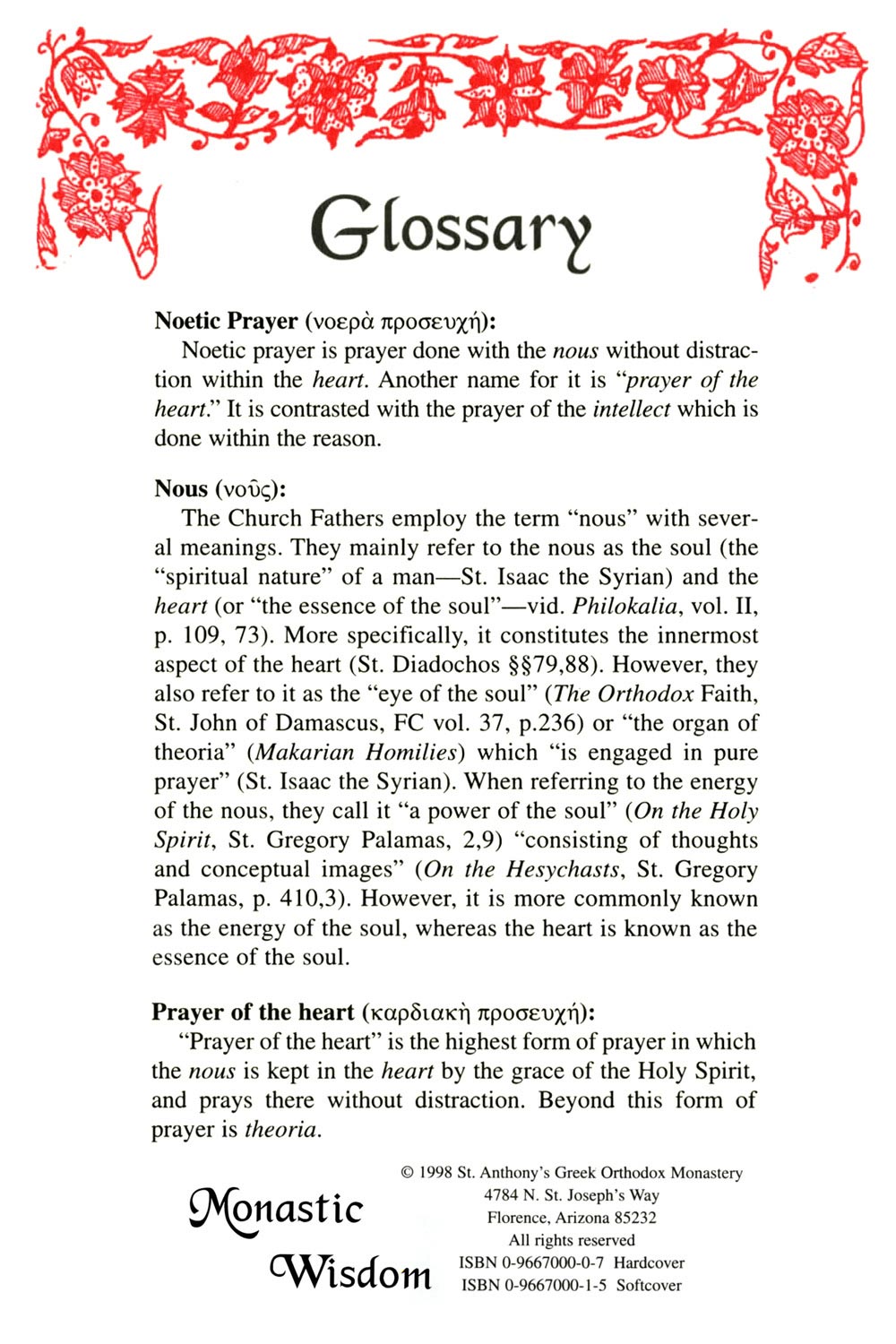 All the art consists precisely in this. Whether walking, sitting, standing, working, or being in church, keep this prayer unceasingly on your lips and in your heart. By calling on the name of God in this manner you will find peace, you will attain purity of spirit and body, and the Holy Spirit, the Source of all good things, will dwell in you, and He will guide you to holiness, to all piety and purity.

2
What praying the Jesus Prayer prayer does

The Jesus Prayer is work common to angels and humans.

With this prayer people attain to the life of the angels in a short time.

The prayer is the source of all good works and virtues and drives the dark passions far away from man.

In a short time it makes a man capable of acquiring the grace of the Holy Spirit.

Acquire it, and before you die you will have acquired an angelic soul.

The prayer is divine rejoicing.

No other spiritual weapon can so effectively restrain the demons.

It burns them as fire burns a wick.

3
Benefits of the Jesus Prayer

With this prayer, “Lord Jesus Christ, have mercy on me”, you will benefit in every way.

With this prayer man is purified, enlightened, sanctified.

The prayer is the lifeline of the soul and of the body.

The prayer is the foundation of perfection.

You will become ethereal and you will fly with the prayer.

There is no other way to salvation, purification and sanctification than the Noetic prayer. It has filled paradise with holy people.

4
Prerequisites for praying The Jesus Prayer

Question:
What are the indispensible spiritual prerequisites in order to practice the soliloquy noetic prayer of the heart, “Lord Jesus Christ, Son of God, have mercy on me a sinner”, without the danger of becoming deluded, to be swept away by the devil?

Saint Paisios:
The spiritual prerequisites of the prayer are:

5
How to pray the Jesus Prayer - I

When I arrived on the Holy Mountain, I sought among the righteous hermits those who were practicing the prayer. There were many then – forty years ago – who had life within them. Men of virtue. Old fashioned Elders. From them we made one our Elder and we had their guidance.

Now then, the work of noetic prayer is to push yourself to say the prayer with your mouth, continually. At first rapidly; so that the nous will not be inundated by the waves of formed thoughts. Pay attention only to the words: “Lord Jesus Christ, have mercy on me.” When this is given a good amount of time, the nous gets used to it and it says it. And you are sweetened like when you have honey in your mouth. And all you want is to say it. If it leaves you, you are greatly distressed.

When the nous gets used to it and is filled – when it has learned it well – it then sends it to the heart. Because the mind provides the nourishment for the soul, and whatever good or evil it sees or hears, its job is to bring it down to the heart, the seat of man’s spiritual and physical powers, the throne of the mind; so then, when the one praying restrains his nous from imagining anything, but is attentive only to the words of the prayer, then, breathing lightly with a little compulsion and volition of his own, he lowers it into his heart holds a closed trial within, and says the prayer with rhythm:

– Lord Jesus Christ, have mercy on me!

In the beginning he says the prayer a few times and takes a breath. Later, when the mind is accustomed to staying in the heart, he says a prayer with each breath.

“Lord Jesus Christ” the breath comes in, “have mercy on me” it comes out.

Say the prayer “Lord Jesus Christ, have mercy on me” with your tongue and with the nous without ceasing. When the tongue becomes tired let the nous begin. And again, when the nous is burdened, the tongue. Just do not stop. Make many prostrations; keep vigil at night as much as you can... So then, when praying occupies his nous he imagines nothing, but pays attention only to the words of the prayer.

6
How to pray the Jesus Prayer - II

Say the prayer. “Lord Jesus Christ, have mercy on me.”

Say each word one-by-one with attention, with understanding.

Do not proceed to the second word if you have not comprehended the first.

Emphasize the ending more, that is, “have mercy on me.”

Now there will come at first listlessness, sleepiness, restlessness and carelessness but be quick to pull yourself together.

When you say the prayer, consider yourself now at the beginning, that you are in hell and crying loudly, asking for the mercy of God.

Distance yourself from despair, hopelessness and similar feelings.

During the time of prayer do not admit any imagination, or form, or image of the Holy Virgin and of Christ or any other saint, nor should you see the words of the prayer noetically.

7
Why we must pray without ceasing

We must continue to say the prayer without ceasing. Within our heart and our nous, only the name of our Christ must remain. Because when we leave the prayer, our communication with God, then the devil starts with thoughts and he makes our mind spin, and we no longer know what we want, what we are saying and what we are doing. 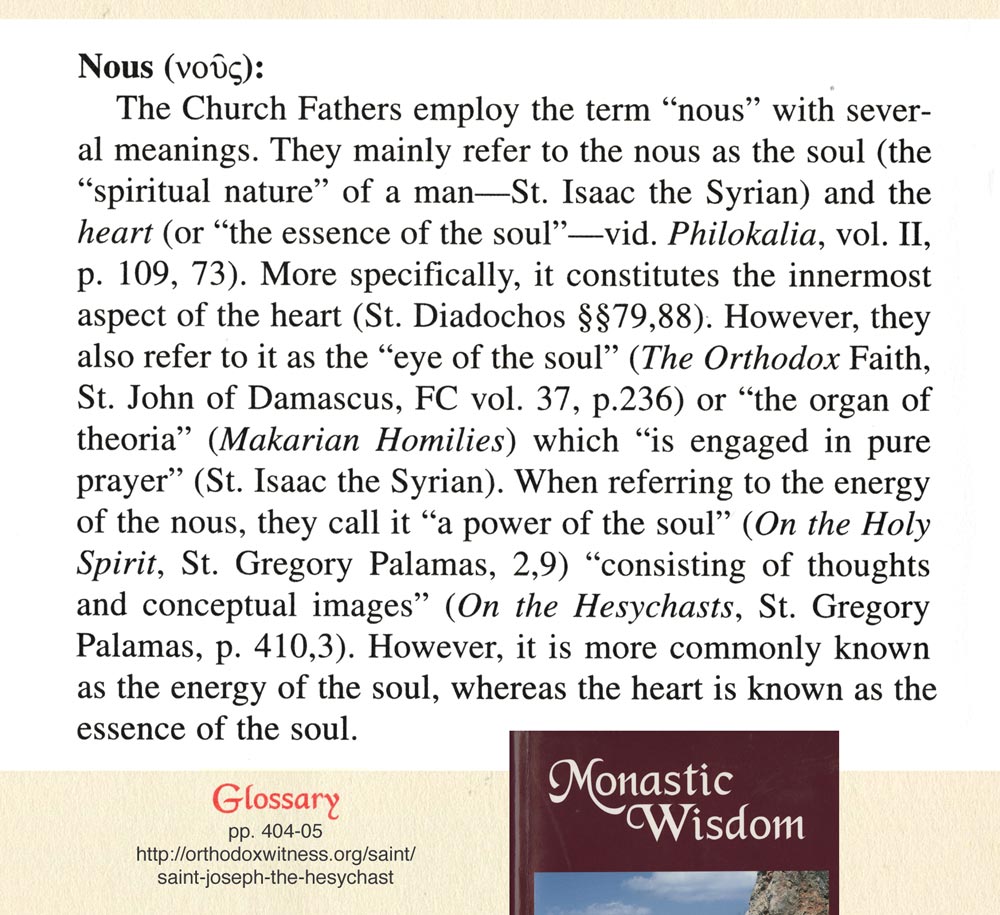 8
A spiritual image of the Jesus Prayer

The name of Jesus, the noetic prayer, say the holy Fathers, is a flask of myrrh.

You open it, you tilt it and the myrrh pours out, filling the room with fragrance.

You cry out, “Lord Jesus Christ,” and the fragrance of the Holy Spirit exudes from all the senses and from every cell of your body; you receive the “dowry of the Divine Spirit”.

9
The need for struggle in prayer

Stay with the prayer, keep struggling, and you will pass the day without sin. Everything else will be given from God Himself.

10
Those who pray without ceasing are blessed

Blessed are those who have Christ in their hearts as their axis and joyfully revolve around His holy name, noetically and without ceasing.

11
Prayer is the most important thing

All the Holy Fathers cry out that the most important thing in the life of every Christian is prayer.

Do you want to put your life in order? Pray.

Do you want to be saved? Pray.

All prayers are good and holy, but noetic prayer is the queen of them. “Lord Jesus Christ, have mercy on me.”

From this little but all-powerful prayer, the Holy Fathers were set in motion and became shining stars of the church.

Get going with this little prayer!

Translated by A.H. and E.H.