The Story of the Mother of God in Iconography

In the first icon we view the Nativity of the most holy Theotokos. According to tradition she was born to the elderly, barren parents Joachim and Anna. 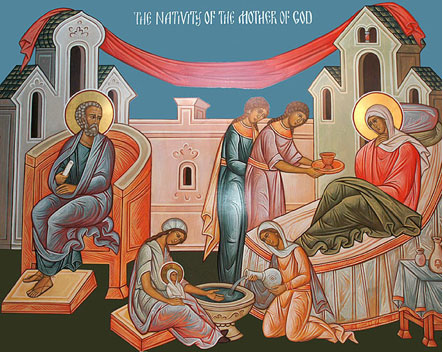 “Isaiah says, ‘The root of Jesse shall come, He who rises to rule the Gentiles; in Him shall the Gentiles hope’” (Rom. 15:12; cf. Is. 11:10). “Rod of the root of Jesse, and flower that blossomed from his stem, O Christ, You have sprung from the Virgin.” (St. Cosmas) The most holy Virgin is the rod and Christ the unfading rose that blossomed from her. 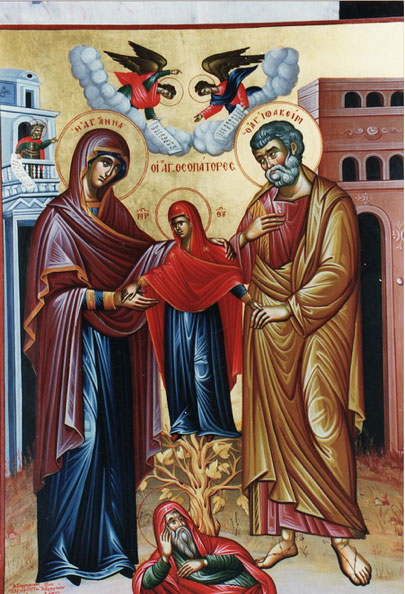 The Entrance of the Theotokos into the Temple. According to tradition at the age of three the most holy Virgin was brought to the Temple, where she stayed for nine years. 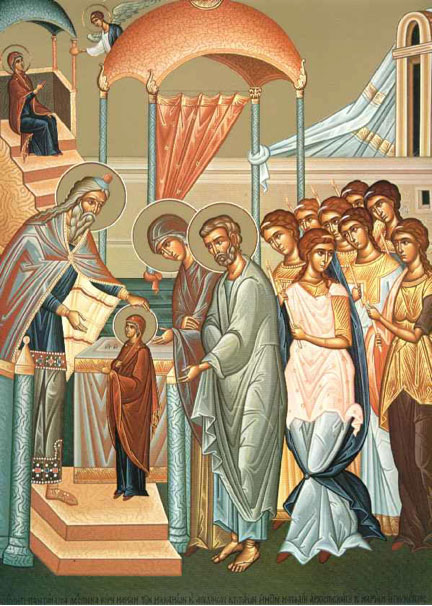 The Evangelismos, or the Annunciation of the Good News of the Theotokos (see Lk. 1:26-39). 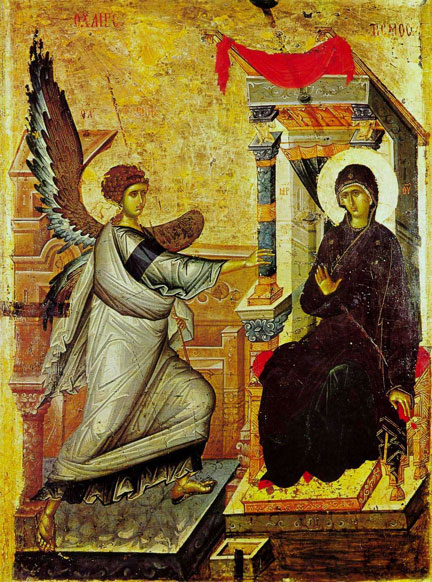 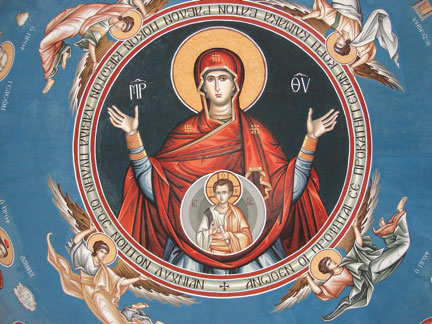 A few days after her conception of the Son of God the most holy Virgin visited her cousin Elizabeth, who greeted her as “the mother of my Lord,” shown fully formed in her womb (cf. Lk. 1:39-56) 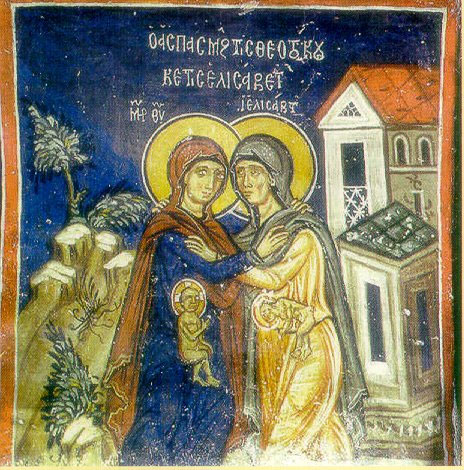 “And she gave birth to her first-born son and wrapped Him in swaddling cloths and laid Him in a manger” (Lk. 2:7). 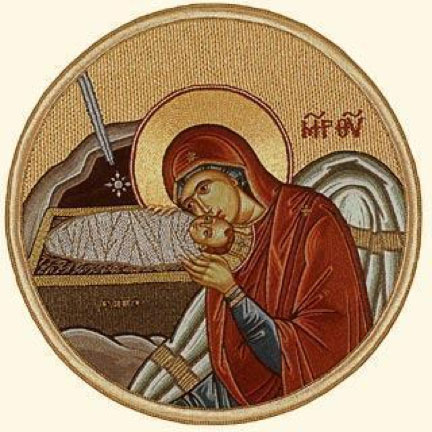 The Circumcision of the Lord. He truly assumed human flesh, willingly accepting to undergo everything the Law required (cf. Lk. 2:22-39). 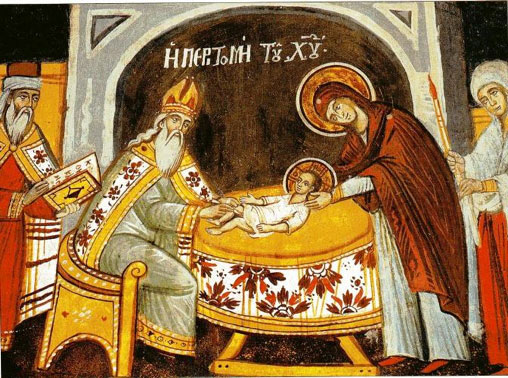 The Flight into Egypt (cf. Mt. 2:13-23). James, “the brother of the Lord,” is following. According to tradition he was Joseph’s eldest son. 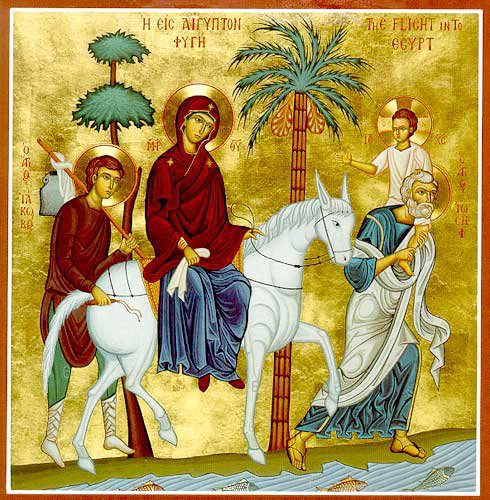 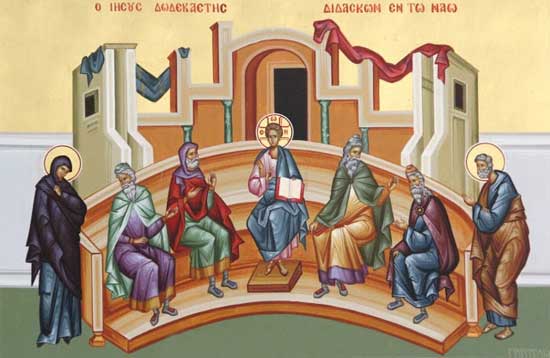 “Standing by the cross of Jesus were His mother…and the disciple whom He loved standing near…” (Jn. 19:25-26) 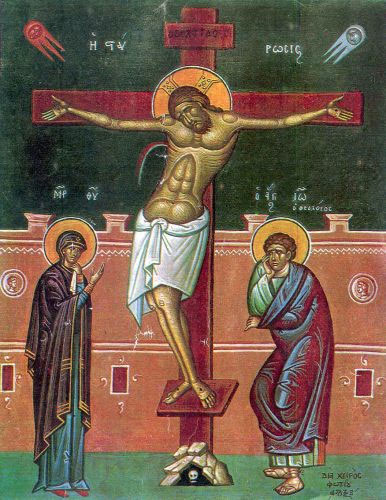 The synoptic gospels mention only Joseph of Arimathea taking down the body of God and wrapping it in a linen shroud. John adds Nicodemus. The synoptics mention “the other Mary,” who, according to the Fathers of the Church, is none other than the Mother of God, who, from John’s account, we know she was present. 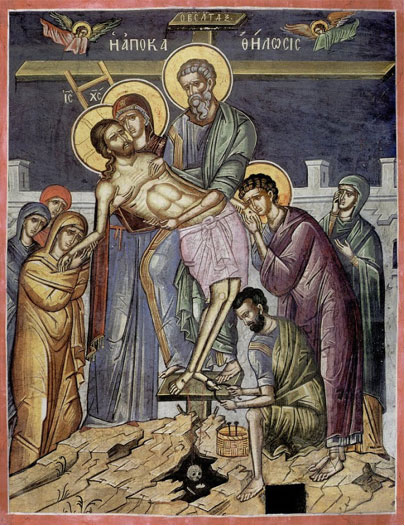 “Now after the Sabbath, toward the dawn of the first day of the week, Mary Magdalene and the other Mary went to see the sepulcher…But the angel said…‘Do not be afraid…He is not here; He has risen…Then go quickly and tell His disciples that He has risen from the dead’” (Mt. 28:1.5-7). 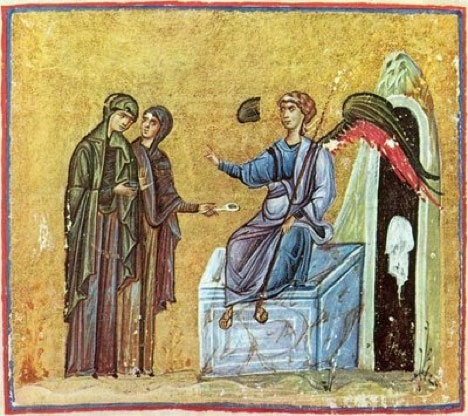 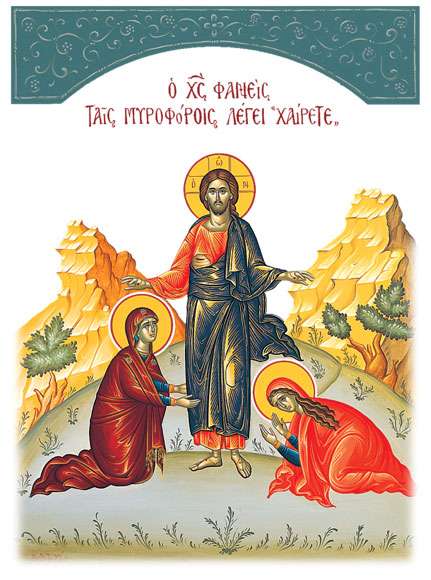 While the gospel accounts mention only the disciples being present at the Lord’s ascension to heaven, in this ancient depiction the most holy Theotokos stands in the middle, as the Apostle Paul is shown on the left. 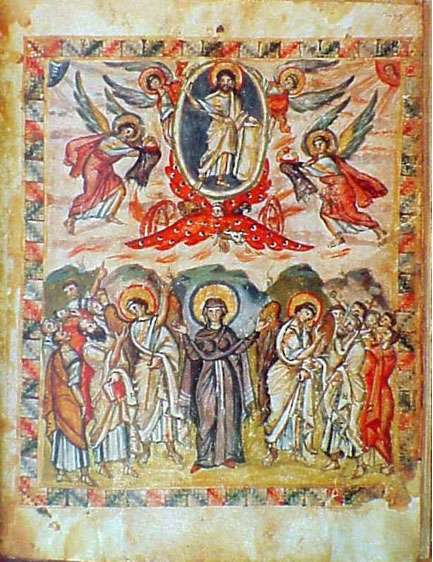 The descent of the Holy Spirit upon the twelve disciples and the holy Theotokos. In the description of the Acts, “When the day of Pentecost had come, they were all together in one place” (Acts 2:1). By “all” many understand to include “the company of persons was in all about a hundred and twenty” (Acts 1:15), which includes “the women and Mary the mother of Jesus” (v. 14). 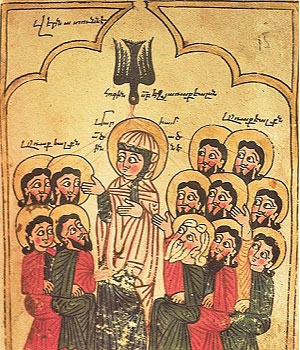 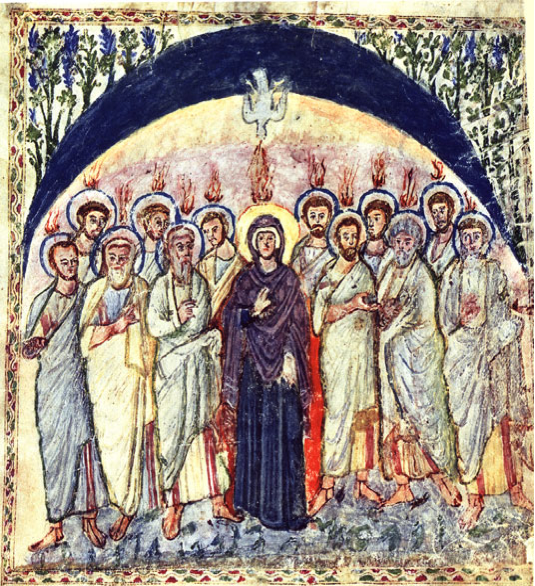 The Dormition, or the Falling Asleep, of the Theotokos. Ivory, Constantinople, circa 1000 AD. 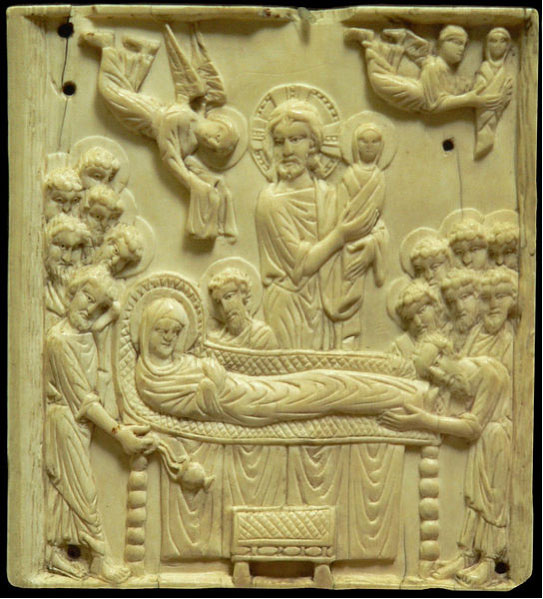 The Metastasis of the Theotokos, literally her bodily translation or translocation, most often rendered in English as Assumption. According to the tradition of the Church, the holy Theotokos died, but after three days her tomb was found empty, having been taken bodily up to heaven to be with her Son. 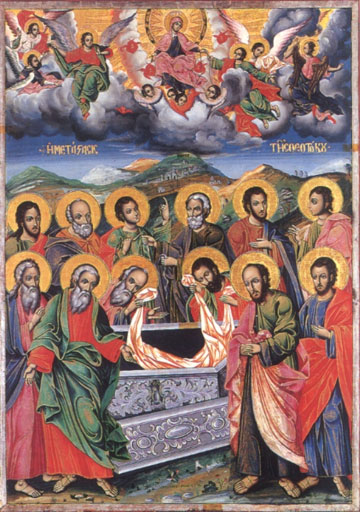 Panagia Pantanassa, The Most Holy Virgin, Queen of All. Following her bodily ascension to heaven she reigns supreme as the Queen of the Angels and Mother of all humans, and intercedes to her Son and our God for our salvation. 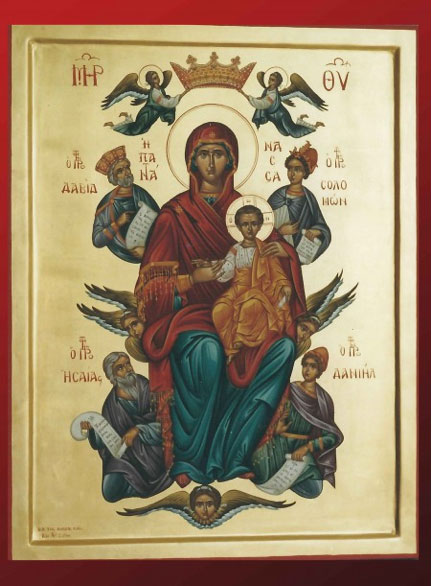 In his Mother's Day message his Eminence Metropolitan Alexios of Atlanta stated the following: "In honoring our earthly mothers on Mother’s Day, let us also honor the Theotokos, the model of motherhood. Our Lord held a special place in His heart for His Blessed Mother. She was the only person with Him throughout his entire life on Earth: from birth to death to Resurrection to Ascension. They had the unique bond that only a mother and a child have. Even when our Lord was hanging on the cross in agony and near death, he was concerned for His mother, and gave her into the care of St. John. At His darkest hour, our Lord showed all of us today how important it is to take care of and love our mothers."