Jesus Christ: Our prototype of FREEDOM

This post is a collection of quotations, taken from our publication, Jesus: Fallen? The Human Nature of Christ Examined from an Eastern Orthodox Perspective, by Fr. Emmanuel Hatzidakis.

Freedom, so much misunderstood in our society, is not exercised when we choose evil, but when, with an enlightened mind and a will strengthened by God’s grace, we always choose what is good. freedom is to unimpededly be able to say and do what is good—not to speak one’s mind and do “whatever.” We reach perfect moral freedom when we naturally embrace what is good, and this freedom to always do what is good is ingrained in our genes. We are truly free when we are completely liberated from evil. (p. 309)

To be a “free spirit,” in the modern sense, is a perversion of freedom, for one pursues what one perceives not clearly, but is moved by impulse, based on inadequate and incorrect information. (p. 316)

Freedom to sin is a contradiction in terms. freedom is achieved when we are free from sin. (p. 309)

Perfect freedom means to be firm and immovable in doing what is right and good. (p. 379)

Moral freedom is occasionally perceived as requiring an option to sin. This perception is erroneous, or else God, who is by nature sinless, would be denied freedom. “The ‘complete’ human ‘nature’ is free of sin,” says Florovsky, “sin being a reduction of human nature to subhuman condition.” 1 (p. 326)

In our freedom we see the key element of our resemblance with God, because God is free. We resemble our prototype when, free from necessity and without being in bondage to any natural power, we decide to exercise virtue, particularly love towards God in total obedience, “for virtue,” says St. Gregory of Nyssa, “is a voluntary thing, subject to no dominion: that which is the result of compulsion and force cannot be virtue.”2 (p. 316)

What distinguishes a human being from the rest of the animal world, more than intelligence, conscience, self-awareness, science and technology or communication, is the “radical difference,” the “single characteristic” differentiating the human being from the animals in kind and not in degree is freedom. An animal does not ameliorate its status and its environment. “An animal can never consider making its own world. It adjusts itself to the present world, but does not create its own. Therefore the animal cannot develop artistically...it cannot create art.”3 (p. 134) 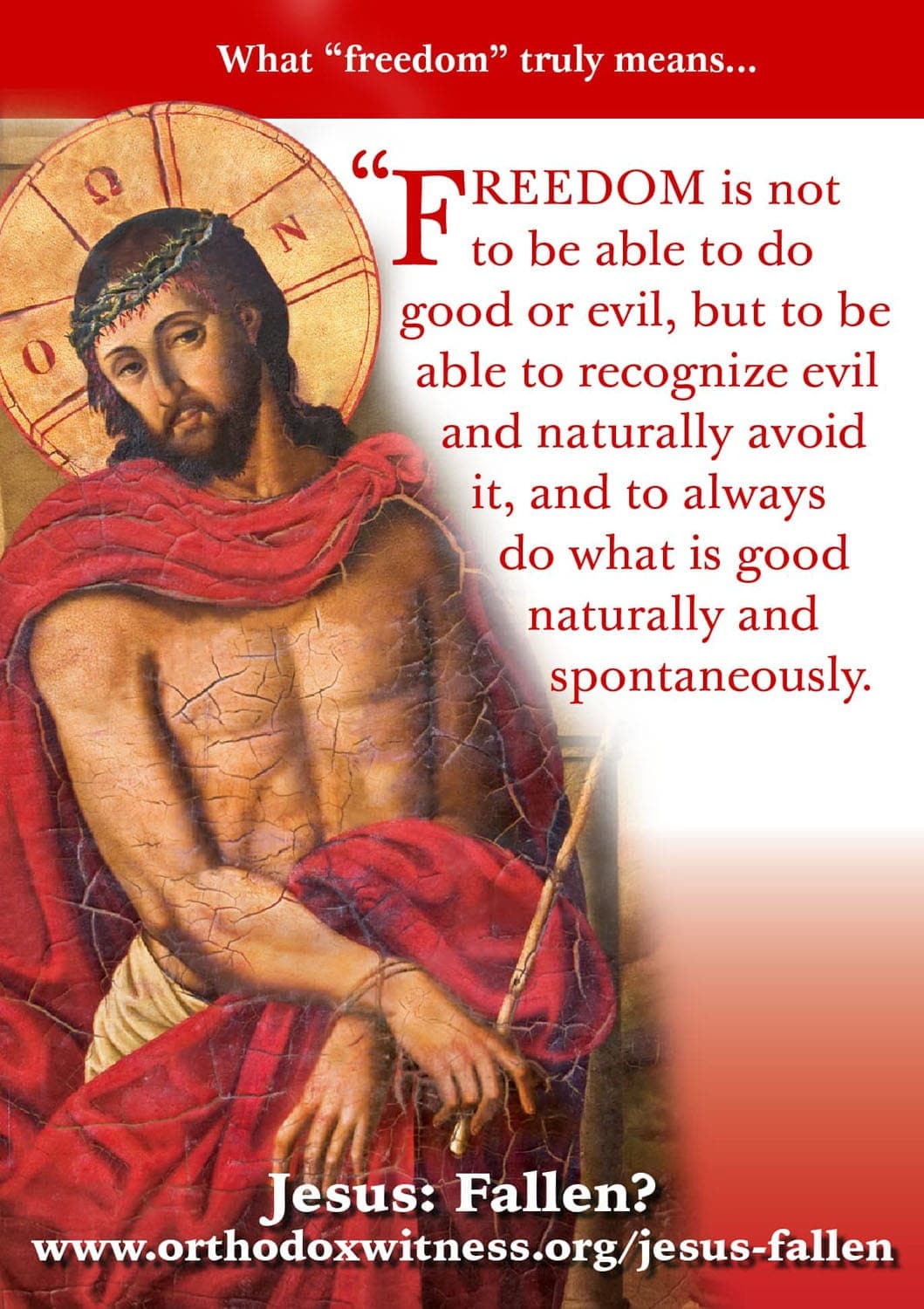 Free will means that man has the capacity to make his own decisions, without being led by his instincts, as the rest of the animal world is. To be free to decide means that man acts not out of compulsion or necessity. If any kind of necessity controlled human life, it would destroy man’s likeness to God ... Likeness, then, is the attainment of virtues, particularly of love, assisted by God’s uncreated grace. (p. 42)

As the Lord said, “Greater love has no man than this, that a man lay down (θῇ, that is, offer in sacrifice) his life for his friends” (John 15:13). Christ offered Himself on the Cross in what is the ultimate form of love, in total freedom, because there is no other way true love can be expressed, except in total freedom. (p. 191)

Christ walks toward His suffering and death in total freedom. As St. Leo points out, suffering and death did not compel Christ. “The fact that ... Jesus Christ was crucified, died and buried was not the doom necessary to His own condition, but the method of redeeming us from captivity.”4 .... Christ was not conquered by death—not because He rose from the dead, but because death could not claim the sinless One. The victory of His resurrection over death was for our sake: “He gave the victory to us,” we chant just before we start the Divine Liturgy every Sunday.5 (p. 200)

Salvation should not be understood narrowly as redemption from sin, but ontologically as the freedom of all creation from its bondage to corruption. (p. 7)

All the holy martyrs of the Church subjected themselves to such voluntary death. If Christ had died a death in the relative freedom of a martyr it would not be enough to save us. He died in the absolute freedom of dying, as one who didn’t have to die but He did. When He wanted, He voluntarily “bowed His head and gave up His spirit” (John 19:30). Incidentally, the bowing of His head was more than a “gentle detail.”6 It indicated that death could not come unless and until He put His head down. (p. 216) 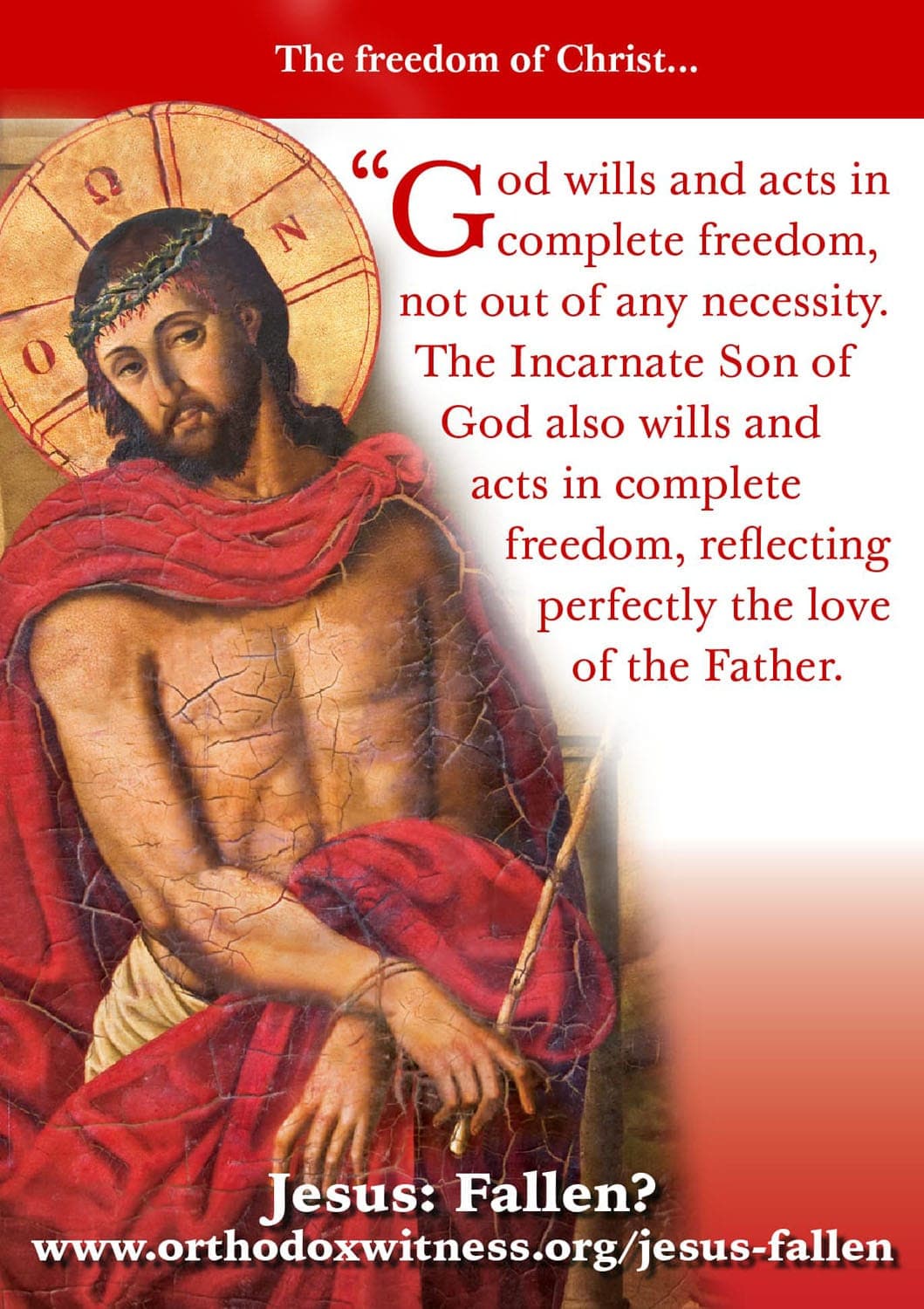 Far from being without free human will, Christ is the only Being who embraces death in total freedom. Christ is the only Being who exercises complete and absolute freedom over death. There are those who choose to die now and not later, here rather than there, in this manner rather than that manner. The redeeming value of Christ’s sacrifice is based on His absolute freedom from death. He died because He wanted to, not because He had to. The voluntary acceptance of death embraced by Christ with His human will and human act is the supreme sacrifice pleasing to God. (p. 137)

The human will of Christ is never contrary to the will of the Father, but in total freedom and moved by filial love is completely subject to the direction of the omnipotent divine will. “Not My will, but Your will” (Mt. 26:42). Christ’s human will never acts in opposition to the divine will, but acts always in harmony and in free alignment with it. (p. 129) 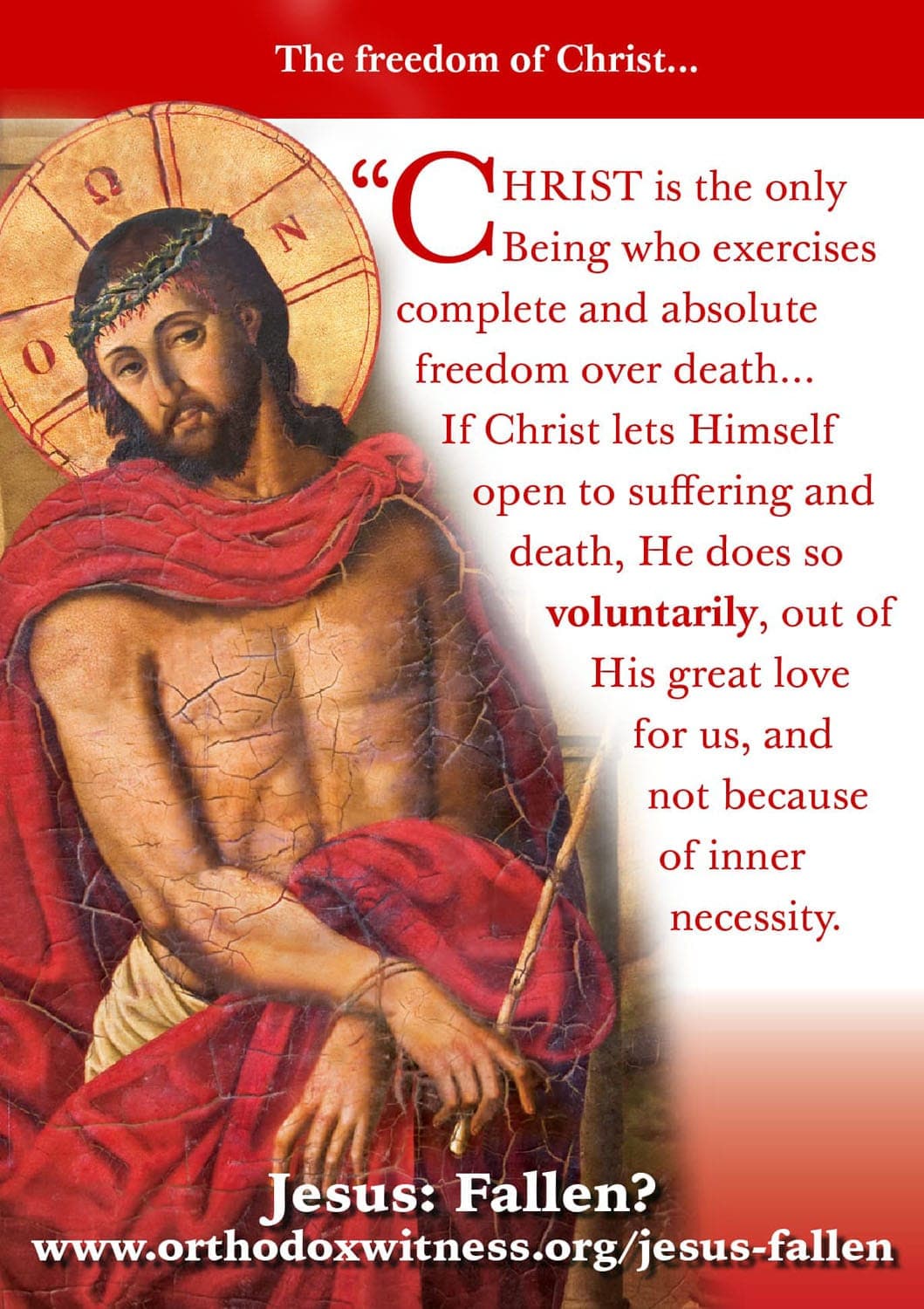 Postlapsarianism7 does not leave any room for the human will of Christ to operate freely. Without the freedom to willingly embrace suffering and death He functions as an automaton, programmed to die. Christ’s death was not been predetermined by the omnipotent divine fiat. He did not accept His fate as having no choice over the matter. The Lord did not enter the fallen world as a victim, but as conqueror and victor. There was no inevitability in His life, as there is in ours. (p. 197)

Similarly, when it comes to the postlapsarianists, although they attribute a human will to Christ, they deprive it of willing and acting freely. However, unless the human will is a full participant in the plan of salvation the incarnation would be in vain. Without Christ voluntarily embracing suffering and death with His human will, and in total freedom, it would mean that He did not fully cooperate with His human will in the plan of salvation. This is an impasse of postlapsarianism. (p. 364)

Christ’s inability to sin was not due to any limitation in His free will, but to the contrary it was due to the perfection of it. While in our fallen condition freedom means freedom to sin, in Christ it means freedom not to sin.8 (p. 308)

“The view that the human freedom of Jesus is compromised by the fact that he could not sin presupposes a mistaken understanding of freedom. According to this understanding, the possibility of sinning is a determining characteristic of freedom. But neither actual nor potential sin is a determining characteristic of freedom. If this were so, God, who cannot sin, would not be free. But if, by contrast, authentic human freedom is the kind of freedom that reflects God’s freedom, a person who cannot sin is freer than a person who can. freedom even from potential sin is an eschatological gift already present in Jesus.” —Fr. Demetrios Bathrellos9 (p. 307)

In Christ we have something unique in human experience: total freedom. Christ was not driven by the passions. He was not a slave to sin; He was not controlled or determined by anything but His own sovereign will. Sin is a form of slavery, as St. Paul teaches. (p. 308)

We end on this final note. Throughout this book we have repeatedly used the expression “in total freedom” (some forty times in all!). We would now like to comment on it, as it is at the heart of our understanding of the humanity of Christ. The concept/principle of Christ’s total freedom is foundational because it safeguards the divinity of Christ. Denial of His absolute freedom from any necessity would automatically reduce Him to a mere man, who could not save us. It is crucial to understand that nothing was compulsive in Christ. Whatever He went through, from His birth to His passion, everything was embraced freely. He embraced everything of His own free will. The weaknesses that belong to the fallen nature were not natural in Him. They depended entirely upon His dual will. Compared to Christ’s freedom, our freedom is very limited. We cannot change the course of events in our life, in the lives of others or in the world in general—He can! Christ is the only one who was truly “born free.” He is the Pantocrator, the Ruler of the Universe. To repeat what we stated in the Overview, we feel that the main contribution of our study is that Christ did not inherit a humanity wounded by the original sin and subject to its deleterious consequences that weigh heavily upon us. Yet, out of His infinite compassion and in order to rescue humanity from eternal death, He voluntarily and in total freedom accepted suffering and death, not only with His divine will, but also with His human will, thus revealing the extent of His love for us. (p. 521)