Eastern Catholics: Why compromise? Be Authentic!

A discussion I had with someone brought me to the webpage of St. Joseph Ukrainian Catholic Church, located not too far from where I live. I would like to share a few remarks I wrote on an article I read there with the Eastern Catholics and anyone who cares about the subject. Here are two quotes from the article:
“In 1595, the Metropolitan of Kyiv and all local bishops signed the Union of Brest effectively breaking ties with the Church of Constantinople and entering into communion with the Pope of Rome while maintaining beliefs and customs.”

“We are an Eastern Catholic Church. We understand this to mean that we are orthodox in our liturgy, spirituality and theological outlook, while faithful to our communion, through membership in our local Church, with the Pope. ‘Orthodox’ is a Greek word that means ‘right believing.’ It is in that sense that we believe we can apply it to ourselves. It was this word that the Byzantine Church used to describe itself and those Churches in which it shared Communion including for many centuries the Church of Rome. However, we also acknowledge that the word has come to hold a technical meaning, namely to describe ancient, apostolic Churches that are not in communion with the Catholic Church. Hence, we speak today of the Greek Orthodox, Russian Orthodox, Ukrainian Orthodox, Carpatho-Russian Orthodox etc.”

Here are my reflections on these statements:

So sad. So tragic—not to understand your own words, and actions. You must not realize it, but when you broke communion with the Church of Constantinople you didn’t break communion with a local Church, but with the entire Holy, Catholic and Apostolic Church, because there is only one Church. You decided to join a local Church (Church of Rome), which had already broken communion with the One Church (which includes the other four ancient patriarchates). In other words you joined a schismatic Church, becoming yourselves schismatic. How sad, not to realize it, and by realizing it return to the communion of the One and only True Church founded by Christ.

As if that weren’t enough, you joined in the heresies of the Roman Church as well. You claim to remain orthodox (true, correct, genuine), but unfortunately you are not. You don’t realize that either, and you won’t admit to your errors. Do you honestly believe that the pope of Rome is “First Among the Equal”? And if you believe that, do you really believe that the Pope accepts that? If you do, provide some proof, some evidence that the pope, any pope, has called himself “First Among Equals.” But if you cannot adduce any proof, why do you remain attached to a deception?

You accepted the light of faith, the illumination that comes from the holy mystery of baptism from your mother Church of Constantinople. How sad that you turned your back to her. How sad you have allowed politics to influence to abandon your mother Church and the communion with all the local Churches, which together constitute the One True Church of Christ. Why did you do that? For plain politics! You state so yourself: you broke communion because you were “oppressed by the Catholic Majority and living in fear of the newly-formed Patriarchate of Moscow and the political implications both would have on their Church, being considered second-class citizens and having very few rights.” What about your co-nationals and former brothers and sisters in the faith, who remained attached to the True Church? Are they second-class citizens? Did they suffer persecution? What evil has befallen on them? If none, why don’t you re-unite with them?

You claim that your theology is “the theology of the Orthodox Church.” Do you really believe that? The Roman Church accepted to take you under her wings and honor the articles you presented to her as conditions of your union (Union of Brest (1595), “Articles Concerning Union With The Roman Church”)1. What was your first requirement? “That the Holy Spirit proceeds, not from two sources and not by a double procession, but from one origin, from the Father through the Son.” Is this what the Nice/Constantinopolitan Creed says? Is this what the Greek Fathers say? Certainly not—and you know it. It is a compromise, on things that must not be compromised. It confuses the temporal mission of the Spirit (“through the Son”) with its eternal procession (“from the Father”-alone). The Filioque is a condemned heresy.2 And if you say, But we don’t recite the addition, I will retort, But you don’t condemn it either. So much so, you are in communion with those who do.

As you have compromised your Trinitarian faith you have also compromised everything else. Take holy baptism, for example. You say: “The water is blessed if the baptismal font is being used, if the baptism will be preformed in the minimal form (pouring holy water upon the head) these prayers are then omitted.” And again: “At each invocation the priest immerses and lifts the child out of the water. Otherwise, where customary, he only pours water over the head.) Isn’t this another compromise? Immersing or non immersing is all the same to you. But not to the True believers. Baptizein means dunk. This is what the True Church has done and continues to do.

You are proud that you have kept the holy Communion after baptism. Yet you state: “This Eucharist [that the infant receives after being baptized and Chrismated] does not affect the ‘First Communion’ as we’ve come to have with older children, for then it will be connected to the Sacrament of Repentance (Confession). At this time the child will begin receiving as an adult. The Sacrament of Initiation is now completed with the reception of Holy Eucharist. If the baptizand is an infant, the priest gives but a drop of the Precious blood, saying: Taste and see how good the Lord is. (Psalm 33)”3 Yes, you have kept the rituals of the True Church, but compromised, like everything else. Your de-latinization is slow coming. Even if you make progress in practices, it’s in theology where the battle will be the hardest. How are you going to fight liberalization and ecumenism?

I live near one of your churches. Ironically(?) it is called Epiphany of our Lord, in St. Petersburg, Florida.4 I say ironically, because our church of St. Nicholas Greek Orthodox Cathedral is in Tarpon Springs, called the Epiphany City, having acquired its name and fame from the ceremony of the feast of the Lord’s Holy Epiphany. I look at the webpage of this church. The Divine Liturgy is called mass (“Mass Schedule,” although below it says, “We celebrate the Divine Liturgy”—the classical compromise seen everywhere). It claims to celebrate the Divine Liturgy “in all its pristine beauty and majesty,” yet it invites Roman Catholics, who “may satisfy their Mass obligations” in their church. On the first page there is a Statement of the Roman Rite Diocese of St. Petersburg, but when you click on it, it tells you it’s dead. Below that, it carries this statement: “Jesus established the Kingdom of God. A kingdom is hierarchical and is authori-tatively (sic) dependent on the direct objective obedience of the King’s subjects; i.e. there must exist a chain of command.” Below it is a photo of Pope Francis. Any comment is superfluous. 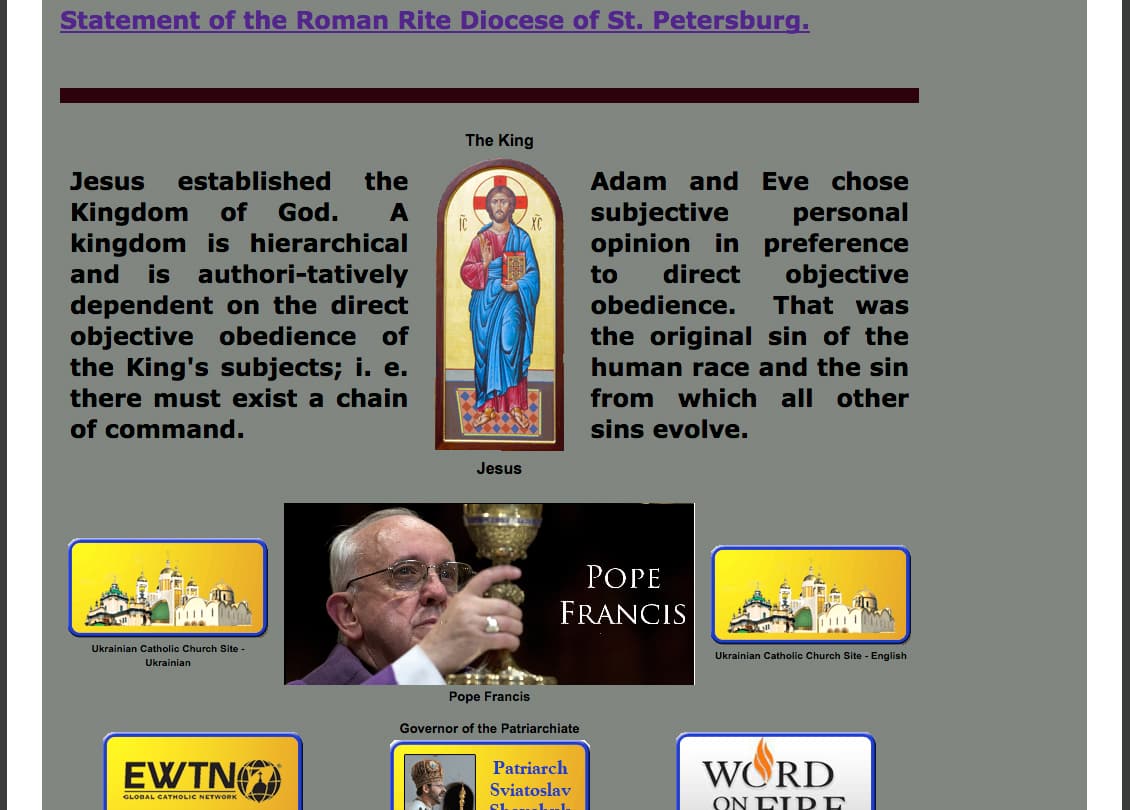 This does not require comment either, but let’s do it. So, we, the non-papists, who don’t “know” Peter (we are not under his “successor”) don’t “know” Jesus either, that is, He doesn’t “know” us; we have no communion with Him. This is your belief, and as long as this statement is there what you tell us is that we are lost souls, that our faith in Christ is to no avail—without the pope. That means that for almost five and a half centuries (from 1054 when East and West were separated, to your union with the pope in 1595) you too were lost souls and you were united with Christ only when you joined His vicar on earth. Is Christ absent to need of a vicar? Didn’t He say, “I am with you always” (Mt. 28:20)? Where is your faith in a vicar expressed during the first 1,000 years of Christianity? Then what you say above (“salvation is a matter of Union with God”) should really be restated: salvation is a matter of union with the pope.

You should know that no Father of the Church had your understanding of Mt. 16:18. Instead, the understanding of the Church has been that in a play of words (Petros-petra) Christ attests that the solid confession of faith expressed by “Rocky” is the foundation of His Church. Peter answered the Lord’s question correctly and in doing so he became a building block of Christ’s edifice, His Church. As he received the blessing, so does anyone who professes the same faith in Him, and thus also he or she becomes a stone in Christ’s edifice. Peter, and his “successors,” is not so unique. At least two popes made the wrong confession and were condemned by the Church. All the apostles were equal, they all received the keys, they all will sit on thrones—and anyone else who professes the same confession. Should we hope that the current pope may give the true confession of faith in Jesus Christ, Who alone is the foundation of the Church He promised to build?

These are just a few thoughts that I had as I was reading some material you have produced about your beliefs and your history. I could add many more important problems: crusades, Inquisition, Vatican state, not to mention the theological differences: purgatory, Immaculate Conception, indulgences, papal infallibility, created grace, and much more. How can you be in union with a Church that professes all that, even if you don’t? I address these words to you as an outsider. Maybe because I am an outsider I see things simply, maybe even simplistically. The fact is, there is no reason to remain attached to Rome. Free yourselves from the papal yoke. Rise above pettiness; end the un-Christian rivalry and strife that exists between you and your co-nationals; and return repentant to the mother Church. She will receive you with open arms. It is my wish that, emerged out of your turbulent past, once again you may become one nation, worshipping together as One Church—even as the True Church founded by our Lord Jesus Christ.

5 thoughts on “Eastern Catholics: Why compromise? Be Authentic!”